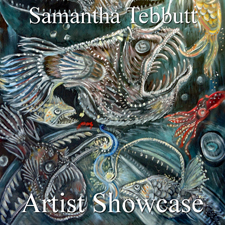 Light Space & Time Online Art Gallery is extremely pleased to announce that artist Samantha Tebbutt has been selected as this month’s featured artist and will now appear in the gallery’s Artist Showcase.

Samantha Tebbutt grew up on the South Coast of England in the United Kingdom.  From a young age Samantha fuelled her imagination with Myths, ghosts and folk tales. This area is rich in natural wildlife Heritage like Langstone Harbour and this inspired her to begin painting landscapes along with creative writing. This area of the UK is rich in coastal history, such as the Mary Rose Ship of Henry VIII sailed out to its doom from the Portsmouth Harbour.

In 1995 inspired by Celtic tales and the idea of becoming an artist, Samantha moved to Southern Ireland. Since her move to Ireland she has devoted her time and has worked hard at becoming both a visual and poetry artist.

In 2011 Samantha decided to become more computer skilled and began to enter art competitions at Light Space & Time Online Art Gallery. Several of her entries were awarded Special Recognition Certificates. With this success her confidence was growing as an artist and in 2012 she had her artwork published in The International Contemporary Artists.

In addition Samantha has been writing and illustrating Hubpages which are now featured. Also, in 2013 her artwork was selected by Galleria “IL Collezionista” in Rome.

Most recently her artwork and writing has been concentrated on the War poets of WW1. Samantha says this about this work, “This has been a very absorbing project, the war poet's biographies are inspiring but often they led tragic lives.”

Samantha’s art and poetry can be found at http://samtebbutt.hubpages.com