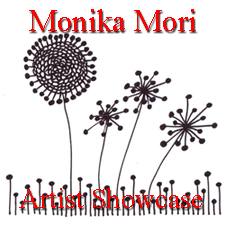 Light Space & Time Online Art Gallery is pleased to announce that contemporary artist Monika Mori is the gallery’s newest featured artist.  She will now be presented and promoted in the gallery’s Artist Showcase for the next 30 days.

Monika Mori, a/k/a MOO, was born in 1960 in Moedling, Austria. She had studies in Fine Art, amplified her scope as an artist by formal training courses and workshops throughout Europe and the United States.

The Austrian contemporary multimedia artist creates playful moody paintings, drawings and collages celebrating experiences and emotions animated by dazzling colors or strictly black and white. Her early works are highly expressive – she has always wanted the world to hear what she has to say, and these artistic communications embody her emotions, experiences and her delight at the interaction with color. For Mori, color is liberating.

Only through art can one mediate the unspeakable, so this allows for a greater freedom within a work. It is a language unto itself and there is merit to all interpretations. The subtle earth palette glows from the surface of the canvas and illuminates the striking dripped forms. Their uneven linear progress forms crowds, forests, circuitry – they travel and lead us on through the painting and beyond. The strength of these paintings reflects the strength of Mori herself, and the intensity of the message she has to convey.

Mori´s collages are a symbol for reduction and construction of the mundane; Interpretations of multiform communication, a brutal dissection of what already exists to allow an origination of fragmentary stories and the creation of a new organism. Her technical games with scissors, paper, ink, acrylics, pen and brush give a lively divergence away from the physical limits and the bundling a perspective which may be at first glance a bizarre worldview.

The drawings, mainly in black and white, bring a fantasy world soberly and childlike to the audience and demonstrate in a simple manner, the artificiality and unnaturalness of today´s world. At first glance, Mori's lines seem clear, but on closer inspection they guide into a strange depth. In her series “Mystical Garden” which started in 2012 and found its renaissance this year, she creates flowers in a seemingly easy style. These drawings are a moral suasion to protect nature instead of manipulating seeds. It is her great concern that people relearn to think independently and to act accordingly. She thinks that mankind had become lazy, likes to have regulations in all areas so that they can make others responsible.

For more than 30 years Monika Mori was in business, before she had to make major changes in her life because of the diagnosis multiple sclerosis in 2004. Through art she could cope much and also deepen her social commitment. With her decades of experiences as a trainer and coach she founded a non-profit project to support long-term unemployed people and to accompany them in the rehabilitation.

Collaborations NGOs and projects for and with children are very important for her too. Mori sees it as a duty for all adults that all must be done for children that they are able to wield an independent and fulfilling life. Since she lives withdrawn for health reasons, she generously donates her art for projects that help children, homeless people and refugees.

Mori´s work has been exhibited worldwide and is included in public and private collections around the globe. Her website www.mori-art.at