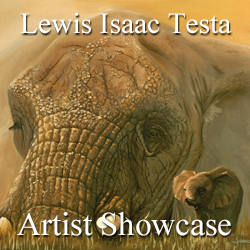 Light Space & Time Online Art Gallery is extremely pleased to announce that the gallery’s latest featured artist is Lewis Isaac Testa and he will now have his art featured in the Artist Showcase section of the gallery.

Art is a different thing to different people.  It can be beautiful or evoke the senses; it can bring out emotions or relax you.  To Lewis it has been a long lasting love affair that has been going on for over 50 years now. It has been the one constant that proved to be more valuable to him than he could have ever imagined, and has in turn changed his life for the better.

At eight he started showing interest in art. However his father stopped that as it was considered fooling around. He needed to be more serious about life. He never thought of art again until he was thirty and had a wife and two children. He did a pencil rendering of his daughter when she was born and that changed everything. His wonderful wife suggested he go to Art School. And so it began.

In 1979 he obtained employment as a graphic artist for Edward Fields, Inc. Which was primarily a high-end handmade rug design company.  There he was able to utilize his talents as an artist, which he is grateful for. His last project with them was helping to design the Oval room rug in the White House, which was a great honor and opportunity.

In October of 2003 he was involved in an automobile accident, which required him to have disc fusion surgery on his neck. When he awoke from surgery, something was wrong.  His entire right side was paralyzed, and he could not feel anything on my left side.  Though routine, the surgery triggered a stroke, rendering him paralyzed on his right side, my dominant side.  He was supposed to be out of the hospital in a few days.  Instead he found himself hospitalized for over a month.  He was then transferred to a rehabilitation facility, as he went through intensive therapy. He would need assistance with relearning everything all over again. He could not even hold a fork.  Art for him at this point seemed a thing of the past and something he had to let go of.   After three to four years of intense therapy he was able to regain much of his mobility back. He is now able to walk again, although now with a limp.

He now paints every day for several hours.  His entire attitude has readjusted.  He is proud and confident in his works and most importantly; it is therapeutic for him to paint.  He feels a freedom when he paints. It is a strange thought and to most who have heard me tell it, if it weren’t for my stroke. He would never have transcended the self-imposed restraints on his life and of course his art had this not happened.

He has been teaching at The South Queens Boys and Girls Club as a Pastel Artist and Instructor.  Although it has come into his life again, and at times has past, it stills remains a constant. He has overcome so many obstacles in his life and, is grateful that art has proven to be therapeutic and helped him express himself in ways he never thought possible. He feels he is one of the luckiest men on the face of the earth, and is incredibly humbled by what art has brought into his life.

Sometimes you have to lose everything to gain everything. http://www.lewistesta.com