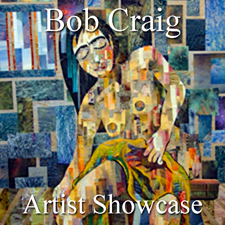 Light Space & Time Online Art Gallery (LST) is very pleased to announce that Canadian artist Bob Craig is now in the gallery’s Artist Showcase. Bob has exhibited at LST for several years and is a regular participant in the gallery’s art competitions and art exhibitions.

Bob Craig is a Western Canadian artist whose path in the fine arts has led him to a unique expression of mood and color through collage and mixed media. He has explored numerous forms of art and craft: painting in watercolor and oils, sculpture and pottery, the latter selected for exhibit at Habitat 76: United Nations Conference on Human Settlements, Vancouver.

Since graduating with a degree in Art Education from the University of Alberta, Bob has worked as an art teacher in Alberta and British Columbia and in restoration at the Royal Ontario Museum.

Bob thinks of himself as a craftsman, constructing, or interpreting imagery from his conscious and subconscious mind. Bob’s work has appeared in juried exhibits and galleries in Canada (Vancouver and Montreal), Italy, Spain, Portugal, Crete, the United States (New York), New Zealand and Switzerland where his exhibition piece. After Treaty Seven, took first prize in the free subject media category at SEETAL 2006. Bob’s work was juried into the SEETAL 2007 exhibition and the Florence Biennale for the second time in December 2007.

Bob works and creates in Vancouver, British Columbia, Canada and you can view his spectacular and ingenious art at www.bobcraigcollage.ca