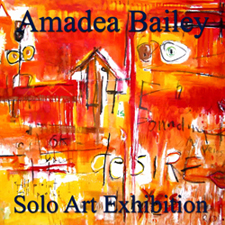 Light Space & Time Online Art Gallery is extremely pleased to announce that Amadea Bailey has been selected as one of the four artists of the gallery’s fifth “Solo Art Series” Art Competition.  Amadea will now have a month long solo art exhibition and she will be featured on the gallery’s front page, in the Gallery’s YouTube Channel, as well as in the “Solo Art Series” archive.

Amadea Bailey lives in Southern California where she is a successful large format mixed media artist.  Amadea will be promoted by the gallery with an extensive public relations campaign, as well through the gallery’s broad social media network.  Also, part of her award package is that she is now featured as an Artsy.net Light Space & Time promoted artist. In addition, she will be featured on the gallery’s YouTube channel and with an event postcard.

Below is Amadea’s Artist Biography, her Artist Statement, along with 20 pieces of her mixed media art.  We hope that you will take the time to read Amadea’s information and to take a look at her fascinating large format art.

Amadea is a formally trained expressionist painter whose artistic exploration is captured in large scale. Her work has been shown in numerous exhibits both nationally and internationally, and six of her paintings grace the walls of Halle Berry’s home. Amadea’s commissioned artwork has also been featured in television, films and commercials.

Amadea’s work is influenced by the years she spent as a child living Kenya, East Africa, where she was free to express herself as she played and danced in a playground of vast fields. She was shaped by the vivid colors and pure natural elements that surrounded her; pink flamingos, mud hut villages, the beautiful horses she rode and the sweet sugar cane she and her friends would find and chew on as they walked to school. The adventure, freedom and spirit of her time spent in Kenya are consistently conveyed in the rich colors and textures of her art.

However, it wasn’t until Amadea was studying at Yale University that she discovered her true passion for art: she found herself engrossed in a retrospective of Claude Monet’s water lilies at the Museum of Modern Art in New York during her summer break before her senior year of college. “I was transported by the vast expanses of color -- the abstract forms swirling and unfolding,” Amadea explains. “The paintings connected me to my childhood and invited me to play, dance and explore.”

From this point forward she started painting and began taking classes in drawing, painting, and sculpture during her remaining time at Yale. Upon graduating from Yale with a bachelor’s degree in fine arts, Amadea went on to further develop as an artist by training at The New York Studio School in drawing and painting and was tutored by figurative expressionist painter George McNeil. After graduating from The New York Studio School, Amadea was dedicated to painting daily in her studio and spent 11 years in New York nurturing her craft.

To regain a sense of openness and connectedness to nature, Amadea moved to Los Angeles 25 years ago. She bought her home and created her dream studio. When you peek inside her studio in the afternoons, you can see Amadea’s body moving purposefully and joyfully as she works on her installation-size canvases. When she begins a painting she is often unsure of where and how it will end. The painting unfolds and reveals itself in a process that Amadea finds endlessly fascinating and rewarding. It is this exhilarating journey that is thus captured on her copious canvas. “As a painter I get to feel again and again the sense of expansiveness, spontaneity and endless possibilities that I knew as a child on the Serengeti Plains under the African sky,” says Amadea.

Amadea’s creativity doesn’t stop at the art she creates: she’s also creative in the way that she sells it. She’s listed her home as a shooting location for film and TV, which recently led to a national magazine shoot at her studio.

Amadea is living her dream as an artist residing in Southern California. When she is not painting she enjoys surfing, dancing and traveling, finding inspiration in everything and everyone she meets.

I grew up in Africa riding horses in the bush, eating sugar cane by the side of the road and playing dress-up with banana leaves. I experienced a sense of freedom and abandon, and an immediate connection to the tactile, physical, and non-rational worlds.  Now, as an adult, my paintings reconnect me to that awakened child of Africa.

I paint as an explorer going on a journey. I disappear into the unknown and dig for what will unravel and reveal itself: new images, new relationships, new ways of moving paint. Scraping, scratching, wiping, adding, subtracting.  Inviting drips, stains, layering, accidents.

I am a deeply physical person. I love movement. In addition to painting, I run, surf, and dance. I paint on a large scale so I can feel my body moving across a big field. I crave the space for spontaneous gestures, for paint to drip and colors to collide.

I search for the image, and its proper place in the world around it.  I allow words and images to appear, disappear, get buried, and resurface. A pair of high heeled shoes, an hour glass, a hot air balloon. Two horses intertwined in a huge white field.

Sometimes this process happens magically, as if by accident.  Sometimes it takes months of moving, playing, changing and editing before the total rhythm of the painting finds the resonance I seek, the moment of yes.

This is not an intellectual pursuit.  I paint because I love the tactile, sensual aspects: tearing, ripping, paper, paint, collage, plaster, glue. Pie tins filled with cerulean, magenta, and indigo. Words scrawled in black ink across a torn page.

I love taking the irrational world of my emotions, hopes, fears, dreams, desires and idiosyncrasies and sculpting and re-arranging them in myriad ways until order is found.

I thrive making order out of chaos.  And paradoxically in this process my mind becomes still. I open myself up to something much bigger than myself.  Decisions make themselves.  Time melts away and I journey into an expansive universe, as wide as the Serengeti Plains. I enter a world of space and matter, building up my canvases with color and texture, recapturing the freedom and movement of my African childhood.