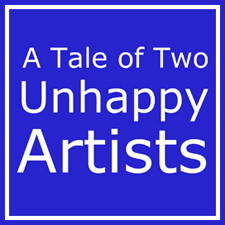 Recently I had two very discouraged and unhappy artists ask me for advice on their art marketing efforts, as both artists had not sold much of their art, as they had hoped or expected they would.  Both individuals were very talented and their goal was to eventually become full-time artists, create more interest in their artwork and of course, sell more of their art.

In this article, I will try to summarize what I learned when I tried to help them with their art marketing issues and you can draw your own conclusions as to why they were unhappy with their sales and marketing of their art.

The first artist was just beginning to establish himself and he had entered and placed in three of our art competitions and also placed in several other gallery competitions too. He complained that despite his competition success that his art sales were poor. I went to his website and found that his art was not prominently featured on the home page, categories were poorly labeled and the site navigation was difficult to follow. There was minimal information on him as an artist as there was no artist statement, no CV or biography of his experience. There were no prices for his artwork and there was only an email address for the contact information. This artist’s website did not have any social media links, an art blog, any press releases or a newsletter feature. Finally, there was no information or promotion about this artist’s achievement of winning any awards from the art competitions that he had entered and his involvement in any art exhibitions!

I googled his name and found that he did not have a Twitter account, no Facebook page, no Linkedin presence and no Google+ page. It is evident to me that no one would know about this artist based on the lack of press releases, social media networking, and any ongoing promotions. In addition, his website did not contain any associated article content that would also help draw anyone to his website, consequently his website traffic was poor and he was frustrated.

This artist further complained to me that there were established artists who seemed to be entering into our competitions on a regular basis and placing high each time. His point was that these artists appeared to be already successful and that they were taking away from his success! I explained to him that all successful artists, just like all successful businesses continue to promote and market themselves no matter what they had achieved in the past. I explained to him that he needed to “work” at marketing his art and that just because he won or placed in an art competition, that by itself would not bring him any sales. Winning or placing in an art competition is just an opportunity for an artist to promote and market their art. I have not heard from that artist again and for this article, I went to his website and it is unchanged since our last discussion.

The second artist is a woman who has sold some of her art through word of mouth and referrals. The sales that this artist made were to very high-end customers, who were also important "influencers" within a major city. When I visited her website there was no mention of any of her previous sales. There were no testimonials or endorsements from her buyers! If they were willing, the buyers’ of her art, who liked and purchased her art, is something that should be promoted. This artist has a great chance to capitalize on the influence of these important people in order to receive more referrals, but she had not done so.

The other issue that I found was that her website was poorly conceived and needed to be redesigned to better fit the high-end art market. Besides the poor design of the website, difficult graphics, her art was not being shown well, as she had small images and they were of poor quality. As a visitor to the website, the images that were being used would discourage anyone from further investigation as the entire presentation did not look worthy of a major purchase of art! Because this artist had sold her art through personal presentations her website was not the source of capturing these prospects nor was the website a part of the sales process. To me, her website was actually a deterrent to any future sales and this would have to be drastically redesigned to fit her target audience, in order to expand her marketplace in the future.

It remains to be seen if this artist follows my suggestion of a website redesign. After the redesign is accomplished, I suggested that she proceed with a promotional and marketing campaign which would be directed at her target audience. If I was this artist, I would want to show prospects my art within the confines and setting of my past art buyers’ homes or offices. What better way there to show someone how the art will fit but within a high-end interior space? Any images used for the website or collateral materials would have to be taken by a professional photographer in order to maximize this presentation. This marketing campaign should be executed locally in order to establish a following and then in the future, she should branch out from there to the same target audiences in other locations and in other cities.

Both artists, based on their lack of marketing and promotion will continue to have a difficult time selling their art unless they make a commitment to marketing. Though a website will “not make sales” a poorly designed website can ruin the entire sales process and these artists both need to have their websites redesigned. In addition, both artists need to realize that they will “not get discovered” by prospects who buy art and they will not become successful waiting for buyers to find them. Each artist should realize that it is the artist who needs to define their target market and that they are the ones who will need to “discover and locate their buyers” through marketing, promotion and social media in order to become successful artists that they had hoped to be.