6 Tips for Artists on How to Talk About Their Art 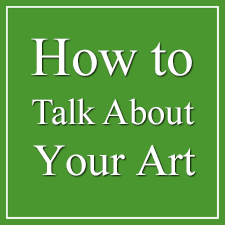 Reprinted with Permission by Artsy.net - Even the most incisive, prolific, gifted artist can feel unduly daunted by the dreaded “Talk.” That is, the request to speak on demand about their work—profoundly and eloquently, no less—be it for a large audience as part of an event or a one-on-one with a dealer or critic in their studio. Indeed, MFA programs require students to toss some word salad regularly, by structuring their evaluations around the excruciating practice of peer and faculty review as a way of professionalizing young artists, readying for them for the “real world.” But being able to distill the abstract idea behind a work—or even an entire practice—into pragmatic, concrete language can propel and even help define an artist’s career.

While wordsmiths such as Liam Gillick and Kara Walker may make it look easy, many an artist would prefer to keep mum on the subject of their own work lest their verbal skills accidentally undermine their creative vision. To gain some insight into what makes an artist a clear and effective speaker, Artsy spoke to conversational wizards from across the art world, including artists, professors, dealers, curators, and critics. Below, we’ve compiled their advice.

First and foremost, artists should assess what’s meaningful to them in their work before they try to tell anyone else why it’s important.

“Figure out the one thing that is most essential for people to know about your work, whether it’s a particular piece or your practice overall. The thing that if it was left out, or misinterpreted, you’d feel truly sad or angry,” said Chloë Bass, a New York-based Conceptual artist, writer, and professor of art at Queens College, CUNY.

Once you’ve articulated it for yourself, Bass suggests figuring out how to explain it to five different people: a non-artist friend, an artist friend, a curator, a neighbor, and your grandma. If you find yourself using the same language each time, you’re losing four-fifths of those potential audiences. “There’s a misconception that talking about our work is somehow different from or fancier than just talking to people. It isn’t, or at least I believe it shouldn’t be.”

Do Some Prep Work

Even if you have your elevator pitch honed sideways and backward, Jane Harmon of New York’s Fortnight Institute gallery said it’s helpful to have a fully fleshed out idea for a show before talking with a dealer or curator. “When I talk to an artist, I want to know what brings her work altogether,” she said. That doesn’t have to be limited to just one thing, but Harmon noted if an artist can identify a specific thread of interest that runs through their work, she knows they’ve been thinking about how it can all play in a space together—which can help her see it in theirs.

Don’t feel the need to rush to finish a bunch of work in advance of presenting an idea, though. Mark Scala, chief curator of Nashville’s Frist Center for the Visual Arts, said he’s curious to talk about the evolution of an artist’s work as it develops. “It helps spur useful conversation when one can see a few examples of source materials—drawings, photographs, digital files, piles of discards, ongoing works that might present intractable problems,” he said, noting that it’s also useful to see the progression from older to more recent work.

For many artists, it’s difficult to pinpoint a “why” for every decision they’ve made when creating a body of work, given that creative expression is an intuitive process.

Artist Nathaniel Mary Quinn said that early on in his career, he often worried he wouldn’t come across as intelligent if he didn’t have an answer for everything he was asked about his work. Now, with numerous shows at the likes of Rhona Hoffman Gallery and Pace under his belt, the artist noted that he’s realized it’s easier to sound informed when you talk about things you do know, rather than trying to bluff your way through the things you don’t, which in turn boosted his confidence. He strives to be honest and genuine. “Don’t make things up,” he advised. “If you don’t know why you make certain choices in your practice, then just say ‘I don’t know!’”

If ever you do find yourself at a loss of what to say, it’s tempting to retreat to the obvious, which is what’s already visually apparent in the work. But that doesn’t help the viewer understand the bigger picture. Self-taught artist and former industrial designer Hugo McCloud, who had his first major solo show at Sean Kelly Gallery last year, said he staves off the desire to describe by having a consistent point to return to when he’s talking about his work. “I know that I’m comfortable beginning a conversation by talking about my process,” he said. So if he feels like he’s veering off topic in a studio visit or gallery discussion, McCloud returns to his process as a touchstone to get him back on track.

Catherine Howe, a painter and director of the New York Academy of Art’s critical studies program, said the big challenge is “to further illuminate a visual work through language that brings new associations, familial links, and unexpected insight.” She advises her students to spend their time talking about the things that aren’t self-evident in the work, like how McCloud focuses on the behind-the-scenes making of the work. “I often ask if we are really adding something to the experience of looking,” said Howe. “Can we prolong and enrich this visual experience?”

Howe is quick to note, however, that there’s a limit to how much you might want to say. “I caution students to avoid hyperbole and, to a certain degree, against front-loading with obviously placed, politically alluring jargon,” she said. Instead, she encourages artists to try to solidify their own speaking voice, even though it can be difficult to do so under pressure.

When speaking about her own work, Bass said “there’s a real sense of risk,” and overblown language is tempting to use when you’re feeling vulnerable. But she believes it’s more useful, both for her and her audience, to figure out how to present big ideas using small—“ by which I don’t mean brief, but rather comprehensible”— language.

Bass, who came to art from a theater background, sees creative practices as based both in conversation, whether scripted or improvised, and collaboration—which is why she said the best tip she can give is to rehearse. “Learn to say the same thing in different ways, using clear, concise language, and the rest will logically begin to follow,” she offered.

But communicating your thoughts and ideas isn’t the same as learning lines—and shouldn’t be. Rather, it should be a process of translation. “With any act of translation, there are always losses or slippages, whether it’s from Spanish to English, or from visual to verbal,” said Bass. “I think we have to be okay with that, and we shouldn’t expect that seeing a thing will somehow convey the exact same information as hearing that thing explained.”

About Artsy.net – Artsy features the world’s leading galleries, museum collections, foundations, artist estates, art fairs, and benefit auctions, all in one place. Our growing database of 800,000 images of art, architecture, and design by 80,000 artists spans historical, modern, and contemporary works, and includes the largest online database of contemporary art. Artsy is used by art lovers, museum-goers, patrons, collectors, students, and educators to discover, learn about, and collect art.  Their website is Artsy.net.